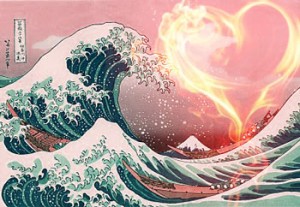 Lying prostrate on the floor of a small church surrounded by Christians praying very recently, God gave me an end-time vision. I’ve since learned others have received similar visions.

I saw a great number of Christians gathered under a huge, well-formed tree next to a body of water that reminded me of Psalms One. They seemed content, talking and fellowshipping with each other. Then the calm water receded without their noticing. A huge tsunami, taller than any building, formed and rolled toward the unassuming Christians. The tsunami was water, but the water was red and on fire. It was not the fire of the Holy Spirit but the enemy, Satan. At first, a few Christians noticed it coming and then more. Finally, all started praying, and a shiny blue bridge stretching upward appeared at their feet. Amazingly, only a few decided to take the bridge to the higher ground. Most were swept away and consumed by the fire.

Jesus is the holy one of Israel, the Messiah. He loved Jerusalem so much; he wept over the city. According to the Apostle Paul, in Romans II, Gentile Christians are grafted into the Jewish nation. As Americans, we see the fertile lands of relationship with the Jewish state drying up literally and figuratively. The drought in California corresponds with the drought of support of Israel by many of our nation’s leaders.The persecution of Christians around the world and the receding religious freedoms here in America are met with the same apathy God showed me in the vision. The unparalleled wholesale brutality we see in many nations is Satan’s end- time-attack against Christ and his followers. The attacks are only starting. The tsunami is on its way.

I had a lack of understanding how God’s promise of the “latter rain” and spiritual outpouring “on all flesh,” promised in the last days in Joel 2 could be reconciled with II Thessalonians 2:3, “Let no one deceive you by any means; for that Day will not come unless the falling away comes first, and the man of sin is revealed, the son of perdition.”

I believe the falling away are the Christians in my vision who are content with the status quo. While the Holy Spirit will fall on all flesh, not all will receive it. Those who seek the bridge to higher ground are those who will seek and thus receive the end-time outpouring. I came to understand the forces of good and evil are polarizing. Many are content with speaking Christianize and fellowshipping with others like them. Yet, some sense the coming tsunami and seeing the leading of the Holy Spirit to higher ground.

God told Abraham and nation Israel in Genesis 12:2-3 I will make you a great nation; I will bless you and make your name great. And you shall be a blessing. I will bless those who bless you, And I will curse him who curses you.”

I fear for America. And though my vision indicates those who do not move to higher ground, deepen their relationship with Christ, publically walk out their faith and join in corporate prayer, will be overcome by Satan’s tsunami. Of course, knowing Christ as Savior guarantees us eternal life and at 71, I am thankful for that. Yet, I am dedicated to advancing the Kingdom of God here on earth until my days here end.

In the vision, the group of Christians eventually came together for mass, corporate prayer, something that biblically has swung the very hinges of history. God has provided a bridge above the Satan’s tsunami. I urge you to join in prayer for the protection of Israel, the safety of this nation and godly wisdom for both countries leaders.

Take a stand in the voting booth for our nation’s religious freedoms. Pray for and support groups who seek life for unborn babies, do battle in the courts for our religious liberty and seek to defeat secular humanism and moral relevancy. Ask God to give us spiritual eyes to recognize evil in its various disguises. Give due to the many brave men and women who died to give us religious freedom. As to corporations who overtly back secular humanistic causes, vote with our feet.

An article on CNN’s website following modifications to the Indiana and Ohio religious liberty law proudly proclaimed “Now Who’s the Moral Majority.” Are they really?

Isaiah’s end time prophecy in 5:20-21 says “Woe to those who call evil good and good evil; Who substitute darkness for light and light for darkness; Who substitute bitter for sweet and sweet for bitter! Woe to those who are wise in their own eyes And clever in their own sight!” The preceding verse tells us. “And let the counsel of the Holy one of Israel (Jesus) draw near and come that we may know it.”

Ephesians 4 27 tells us (ISV) “and do not give the devil an opportunity to work.” I believe that means in us and also in our world. But, remember it was Jesus who came to destroy the works of the devil. (I John 3:8)

Speak up. Stand up. Move to higher ground in  your walk with Christ. But first pray, seeking the Spirit’s wisdom and leading.

Lastly, the Bible is God’s living Word and speaks to us afresh each time we read it. God recently showed me a verse I knew He meant for me during this time. Psalms 144 1-2 “Praise be to the Lord, my Rock. Who trains my hands for war and my fingers for battle.”
My fingers typed the words you read. I pray you consider them. Writing is a way I make war and do battle. I urge you to seek God and learn during this time of worldly tesing, how and in what specific battle He is calling you to fight.